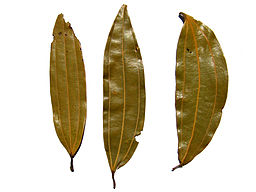 Bay leaf (Laurus nobilis) medicinal herb refers to the aromatic leaf of the Bay Laurel tree and it is native to Asia Minor, Egypt.  It is also found in parts of India.   It is from the Lauraceae family and it is also called Sweet bay.

This medicinal plant has been used since ancient Greece as herbal remedy and it is primarily used for its distinctive flavor and fragrance as a culinary herb.

It is often used to flavour soups, stews, Moroccan-style dishes, and in Mediterranean cuisine. The leaves do not develop their full flavour until several weeks after picking and drying and it is highly favoured by many chefs.  It can be found as an ingredient in numerous recipes inclusive of French recipes.

When it is dried, the fragrance is somewhat similar to oregano and thyme and the International Herb Society has designated it as Herb Of The Year for 2009.

Myrcene, which is a component of many essential oils used in perfumery, can be extracted from it, and it also contains other essential oil such as eugenol which has anti-inflammatory and antioxidant properties.

Other constituents are cineole, also referred to as eucalyptol and this is also an essential oil which can be found in abundance from the leaves.  Other essential oils are terpenes, methyl eugenol and sesquiterpenes.

It is one of the oldest herbs found in Egypt and was recorded in the Papyrus Ebers, which are scrolls dating back to the second century B.C. Oil of Bays (Oleum Lauri) is used in medicinal liniments for bruises and sprains.

Therefore, bay leaf is a real traditional medicinal herb and It is also a decorative herb.  The essential oil can be found as ingredient in detergents, soaps and also cosmetics.

The lauric acid content gives it an insecticidal property which is effective in keeping moths away. It is used to treat ailments such as, migraine headaches, cancer, bacterial and fungal infections, gastric ulcers, rheumatism, arthritis, amenorrhea, and colic.

It contains compounds called parthenolides, which are useful in the treatment of stomach ulcers.

Bay rum is made from bay leaves

It is said that a sailor was tired of using the bay leaves to rub on his skin to give that distinct aroma, so he decided to steep the leaves in rum in order to extract the essential oils. This move however resulted in Bay rum which is now widely sold worldwide.

Bay rum can be found in most households. Some individuals claim that you have no medication at all if you do not possess bay rum in the home.

In Jamaica, we use bay rum to rub all over the face in case of nausea which we refer to as bad feeling.  For this condition, it is also inhaled to give immediate relief from nauseousness.

Therefore, in pursuant of the sailor's stint, as an home remedy, an individual can make his or her own bay rum from bay leaf to save money and time.

Return from bay leaf to history of herbs