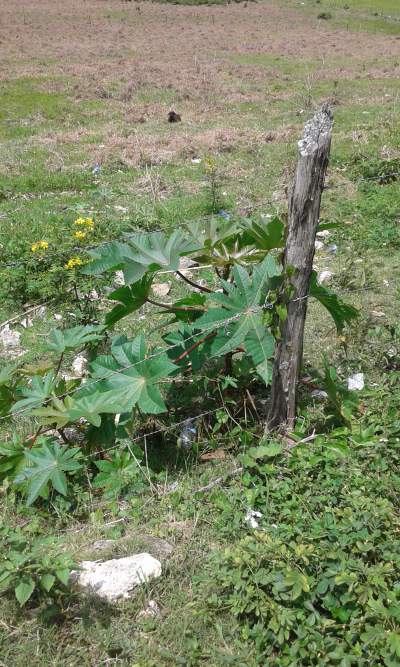 Castor oil medicinal herb is taken from the castor plant (Ricinus communis) which is native to India, Africa and Central America.  It grows wild in most of the tropic and subtropic areas of the world.

The oil, leaves, root, flowers as well as seed of the castor plant are all used as herbal medicine.  It is a perennial flowering plant from the Euphorbiaceae family.

It was cultivated 6000 years ago by the Egyptians, who used the oil as fuel to burn in their lamps.  I am never without my oil.  It is always on my table somewhere ready to be used when the need arises.  The oil is obtained by pressing the seeds of the plant.

It has even been reported that it can be used as a mosquito repellent.  So keep off mosquitoes by rubbing it on the arms and feet or any other exposed part of the body.

It is a vegetable oil obtained from the Castor bean and it is a very pale yellow liquid with mild or no odor or taste. Castor oil has a very radical effect on the stomach and intestines and is not recommended for internal use in large quantities especially for children.

It is used as a pack for ailments such as, abdominal complaints, headaches, muscle pains, inflammatory conditions, skin eruptions, lesions, and sinusitis.

A pack is made by soaking a piece of flannel in the oil. The flannel is then placed on the painful areas and then place a hot water bottle on top of it. I have tried this and it worked.

This remedy was also endorsed and suggested by the American psychic Edgar Cayce, given in many healing readings in the early mid-1900s.

The leaves of the castor plant can be used in a baths to reduce swelling in the joints and to relieve all bodily aches and pains. The bath can also soothe and calm the body, especially if an individual had a long hard day at work.

This medicinal herb, when used in the proper way, can do wonders to both the mind and the body. The leaves can also be placed on top of the head, tied down to prevent it from moving and this procedure will keep the head cool.

In regards to treatment of arthritis, put one tablespoonful of the oil in a cup of ginger tea and consume before retiring to bed as a dosage.

It is used as purgative and laxative taken in teaspoon doses followed by a glass of freshly squeezed orange juice.

It has many good external uses. In China it is used as a rub for deformed faces and joints. When heated it is used to rub arthritis and rheumatism joints and as a bath oil it relieves many skin problems such as burns, sunburns, skin disorders, skin cuts, stretch marks and abrasions, making it a very effective herbal bath.

It also contains acne healing properties.  Castor oil medicinal herb is rich in fatty acids and very moisturizing and lubricating to the skin and it can soften corns and bunion.

The other primary components apart from fatty acids are Oleate as well as linoleates.

It can also be used to treat cataract, pterygium and other eye ailments. Some persons drop a small amount in the affected eye or eyes, while others feel more comfortable to rub it on the eye lids before retiring to bed.

In Jamaica, the plant known as agnus castus is used to cure constipation and bodily pain. When it is applied to wounds, castor oil will stop the bleeding.

When heated it can be massaged into the hair and will strengthen it and eliminate dandruff, lice, fleas and other scalp problems. When mixed with olive oil, it will blacken the hair and when it is mixed with cocoa butter, it will make the hair grow.

Are you suffering from hair loss? Hair loss is a very big problem throughout the years.  People try all different kind of remedies to help with hair loss, but with very little success.

However, castor oil may just be the answer for hair loss.  My grandmother used it for that purpose, my mother also used it and of course I have used it and I am still using it.  It is also very effective in thickening the hair if it is falling out.

This medicinal herb was utilized by the Egyptians to promote hair growth.  To further strengthen it and give it a nice aroma, they combined it with sweet almond oil.  Mixing it with almond oil also soften it in a very mild way as well as make it smoother.

It has been used to aid child birth

This medicinal herb has been used to induce labor in pregnant women, although it is not always effective in application and castor oil should never be done in this manner without a medical practitioner.