Elderberry medicinal herb can be used as insect repellent 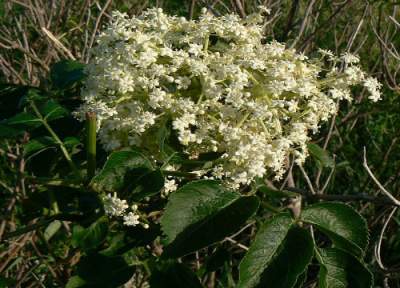 Elderberry (Sambucus nigra) medicinal herb is a plant which means black elder and it has been used medicinally for hundreds of years.   It is a genus of 5 to 30 species of plants in the Moschatel family, Adoxaceae. This is a perennial herb and numerous species of this plant are grown in Europe and North America.  It is also popularly known as elder.

The tincture has long been known as the 'poor man's medicine chest' for its usefulness and the edible berries have been known to mankind for centuries for their astounding medicinal health benefits.

The leaves, flowers and every other section of this medicinal plant may also be used as herbal medicine.  However, one must be careful with the root as it was discovered that some of the Sambucus species can be exceedingly toxic and can promote vomiting. Not to be daunted however, the woods may be used to make musical instrument.

Studies have shown that this medicinal herb is effective in treating influenza and those who use the medicinal extract recovered much faster than those on a placebo. Therefore, it is a natural influenza treatment. A small study published in 2004 showed that 93% of flu patients who were given the extract were completely symptom free within two days and those taking a placebo recovered in about six days.  This is simply amazing and it gives a very positive outlook.

The juice was used to treat the flu epidemic in Panama in 1995. It is also good to improve vision and to restore the heart to good health.  It is also a good herb to lower cholesterol.

It is an old time favorite of European herbalists and it is an antiviral and antioxidant medicinal herb. Also called elder,  it is native to the Americans and the tea made from the flowers is used an alternative medicine to treat respiratory infections. The leaves and flowers can be made into poultices and applied to wounds.

It is an all purpose healer for almost every ailment. So for many years now it has been utilized in various ways by individuals including, the making of dye, as food, wines as well as jam. The elderberry syrup and liquid extract are useful for cough and upper respiratory conditions.

There are individuals who have built up an intense dislike to the odor of the flowers.  However, despite the smell of the flowers, they are beautiful to the eyes and they also contain medicinal benefits. They may be used to remedy ailments such as sprains, bruises, wounds as well as swellings which are caused by inflammations. Another benefit of the flowers is that they may be used as a wash to soothe, moisten as well as soften the skin.

The tea made from the flowers is an excellent herbal laxative as well as it is useful to aid in advancing perspiration and to eject mucus and saliva from the mouth.

It is also known as Elder

Elderberry which is also called elder, in days of old, was inundated with all kinds of romance stories, fables, and also beliefs. It was called "the stinking elder" by the greatest and most famous English poet and playwright, William Shakespeare. This was referred in one of his plays, entitled "Cymbeline." He utilized this medicinal plant as an emblem of bereavement and despair.

He was so enthralled by the stinking elder, that he highlighted it once more in one of his plays "Love's Labour Lost." Due to the popular belief that Judas was hanged from an elder plant, he generated this archaic and middle ages belief in this piece of work.

According to "A Modern Herbal" by Mrs. M. Grieve, you can make the syrup as follows: Pick the berries when thoroughly ripe from the stalks and stew with a little water in a jar in an oven or pan. After straining, allow 1/2 oz. of whole ginger and 18 cloves to each gallon. Boil the ingredients for an hour, strain again and bottle. The syrup is an excellent cure for colds. To a wine glassful of Elderberry syrup, add hot water, and if desired, you may add sugar.

Return from elderberry to herbs