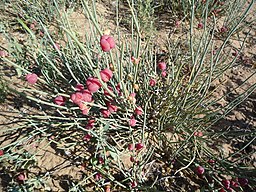 Ephedra medicinal herb is a perennial evergreen plant that is native to inner Mongolia and northern China.  It was discovered by the Chinese more than 5000 years ago.  However, it was not until 1923 that the western part of the world began to see it as an important plant to be researched. They discovered that it contained many herbal benefits.  It is from the Ephedraceae family.

It contains an element by the name of ephedrine and this ingredient is utilized as a nasal decongestant as well as it used as an asthma treatment in the USA. Ephedrine is also used to stimulate the central nervous system.

The common names are Ma huang, Ma Huang, Mormon tea, Desert tea, Chinese Ephedra and Epitonin.  It is a thermogenic substance and a thermogenic substance is very vital when considering to lose weight because it increases metabolism and a raised metabolism uses calories more efficiently. It is often mixed with different thermogenics like green tea extract for the synergistic effect which will lead to a more effective weight loss.

Various kinds of species of the plant, the botanical name being "Ephedra sinica" can be found in very hot places, such as deserts and other dry parts of the earth. The species come in varying colors inclusive of green, red as well as gray.

It was banned as a natural supplement

The vast amount of people who have safely used it to burn fat and lose weight were devastated when the U.S. ban was imposed in 2004. The FDA was claiming an elevated demise rate attributed to the use or misuse of this herb and ephedrine which is the the main active ingredient in the plant. However, additional investigation confirmed that only five of these deaths maybe attributed to its use, so the ban was lifted.

However, the ban was not across the board. They solely banned it as a natural supplement. They did not ban it in cold and flu remedies manufactured by pharmaceutical companies.

It should be kept in dry place. Ensure that it is out of the range of children and animals. Do not store it in bathrooms, since the moisture and heat can cause the weight loss supplements to leak and lose its effectiveness.

This medicinal herb increases metabolism and used as an herbal weight loss. It also relaxes the air passages within the lungs to assist with asthma and cough. It promotes perspiration to aid a person's recovery from minor colds and flues. It also promotes urination to relieve edema. Although this medicinal herb is not a cure-all, it is effective in the treatment of many of afflictions.

It is effective as an aid to individuals who wants to quit smoking. This is possible due to the fact that it possesses ingredients that can decrease the urge to smoke.

It can relax the air passages promoting healthier breathing which will aid in an attack of asthma. It can even help in alleviating hay fever.  It is now used in modern, western medicine and it is used to help elevate blood pressure for those who suffer from hypotension or low blood pressure.

The outcome that it has on the system is that it constricts the blood vessels thereby expanding blood pressure. Additionally, for asthma sufferers, this medicinal herb has been recognized to expand the bronchial tubes, thereby boosting air intake.   Ephedra can also encourage menstruation as well as uterine contraction.

Return from ephedra to herbs for diseases