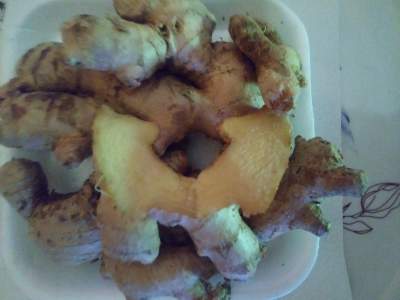 Ginger (Zingiber Officinale) medicinal herb is based in the highlands of Scotland and is native to Southern Asia, but has now spread to East Africa and the Caribbean. It was brought to the Americas by the Spanish in the early 16th century and was used by sailors as a remedy for seasickness. In the 13th century, Marco Polo tasted it in China and brought samples to Europe.

Throughout history it was used as a powerful preservative. The major producers of this herb are India and China. The root is not actually a root, but a rhizome. It is a small herbaceous, perennial plant belonging to the Zingiberaceae family.

The name of this herb is derived from the Sanskrit word "tringa-vera" which means "with a body like a horn." The depiction is in regards to the rhizome which in fact looks like a horn.

I think this is the herb that is mostly used in Jamaica and therefore, every house whether rich or poor, has it placed securely somewhere, especially in the refrigerators.

It is primarily used in most kitchens

Most kitchens are hardly without this rhizome. For the last few decades, ancient civilizations have used this herb in both cooking form and medicine form.

Although the technology back then was not close to what it is today, the ancient civilizations knew that ginger would help prevent ailments ranging from motion sickness to athlete’s foot. The benefits of this medicinal herb are numerous.

In the 1800's, the powder was mixed with liquid and taken as a remedy for gout, arthritis, and rheumatism. It can make the pain of rheumatoid arthritis less intense because of its anti-inflammatory properties.  It is a good remedy for those suffering with cancer.

In 1814, Dr. Robert Thornton noted that tea made mixed with honey was beneficial for those suffering from coughs, colds, bronchial catarrh, colic, stomach pains, menstrual cramps, gas and indigestion. It is a very good antiviral herb.

Some people use it as a delicacy, some use it as medicine, and others use it as a spice and culinary herb.  It can be roasted and buttered.

It is used as a flavoring in vegetables, soups, fish, meat and many baked goods. I personally use it in all my dishes.

In the Orient it is added to all dishes to balance out the natural yin yang elements. The powder is used in spice cakes, cookies, and other pastries.

I use it in all my beverages and this is the practice of many Islanders. It gives a very mild peppery and sophisticated flavor when it is blended in with juices, beverages and other drinks.

It is a natural alternative to the drug, Dramamine but may not interact well with antacids, insulin, anticoagulants as well as non-steroidal anti-inflammatory drugs (NSAIDs.)

Ginger is a part of Chinese medicine

It is used in Chinese medicine for over 2,000 years in tea or chewed to relieve nausea, vomiting, gas, indigestion, and alcoholic gastritis also know as as a hangover.

Also known as Jamaican ginger, it is wonderful for warming up the entire body and eliminates wastes through the skin.

When the warm tea is sipped slowly, it will bring on late menstruation and relieve cramps. It is also used as an appetite stimulant and is added to all vegetable dishes to make them more digestible.

It will make an excellent tea when combined with lemon, which some people referred to as ginger lemon. While it stimulates, lemon will purifies.  That is a perfect combination.

Fresh or dried it can be used as a tea to stop the production of mucus and fat in the body as well as for asthma, flu, and gastric problems.

It tones up the walls of the intestines and aids digestion. If taken regularly it can protect against the spread of contagious disease.

A little history of ginger

For hundreds of years it demonstrates a crucial place in Chinese medicine. It was referred to by Confucius in his writings as well as in the Moslem Koran which suggested that it was present in the Arab countries since 650 A.C.

From the beginning of time, it was one of spices known in Western Europe and it was utilized since the ninth century.

During the 19th century in England, bar owners placed containers of the powdered ginger on the counters. This was used by the patrons to put in their beer.

The fresh root can alleviate toothaches

It is said that the fresh roots can be chewed to relieve toothaches and the powder may be used into a paste and spread on brown paper and applied to the forehead to relieve headaches. It can improve memory and alertness.

It is a very useful vitamin and supplement. However, it is harvested year round just like the hawthorne berry.

The harvests, which are obtained roughly five months or so after being planted, are used in the creation of products such as candied and ginger syrup.

Harvests that are obtained later can be sold fresh. The longer it remains in the ground before being harvested, the spicier and hotter it gets.

Keep in mind that not anyone can grow this root. It takes a special type of soil, which means that it will not grow anywhere.

10 to 20 grains of the powdered herb or one teaspoon to a cup of boiling water, sweetened with honey or sugar makes a wonderful herbal tea.

In Jamaica, if we do not have the powder, we will use a bit of the rhizome to about two cups of water, allow to boil, sweetened and serve about three persons.

Ginger medicinal herb, when fresh, should be stored in a sealed plastic bag in a cool place or in the refrigerator.

Return from ginger to herbs for diseases