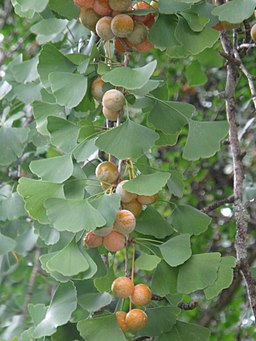 Ginkgo Biloba or ginkgo is definitely one of the oldest medicinal herbs which is native to China.  Also referred to as the "Tree of Life" it has been on this earth for more than two hundred million years.  Now that is a lot of years, plus the medicinal leaves are probably the most studied leaves in medical settings. It is undoubtedly an herbal kind in medicine and in Europe as well as the United States, these countries are major sellers of ginkgo.  It is a perennial plant from the Ginkgoaceae family and the main parts used as herbal medicine are the leaves.

As the Ginkgo plant is still in tree form, it produces fruit that is not edible. Inside of the fruit are seeds which are poisonous to human beings. Most of the researches which are currently being carried out on it are now being done on the leaves.

Several traditional medicines consist of this plant and are generally used for improving memory and also to treat circulatory problems. Scientific studies support and confirm such claims.

The latest facts shows that it could quite well be effective for treating decreased blood circulation to the brain, particularly in the aged. There are two types of chemical substances in Ginkgo leaves which are flavonoids and also terpenoids. These chemical substances are thought to contain very powerful antioxidant properties resulting in assisting individuals who suffer with Alzheimer's disease.

Despite the fact that many elements of the plant have already been studied only two have been directly related to the great results of the plant, as stated before. For this reason it is displaying a developing connection with treatment of Alzheimer's disease as well as Dementia. Since it is so effective in improving blood circulation to the brain and because of its potential antioxidant properties, the proof that Ginkgo could aid all these sufferers is amazingly hopeful.

Ginkgo might also lower the side effects of menopause, osteoporosis, and heart problems. The alternative of this medicinal herb possesses a lot more appeal nowadays than the choices of prescription medicine that has unpleasant side effects. Children under the age of twelve must not use it and in grown-ups it usually takes approximately four to six weeks before you can see some meaningful results. It is now being used as an anti aging solution since it is a very powerful antioxidant that wards off the free radicals.

It is very common and it is becoming more important to healthy individuals who include it as an herbal supplement on a everyday basis for greater awareness and improvement of memory. Many men are using it to treat impotence in addition to increase fertility.

The Chinese have used ginkgo for a long time and have encountered excellent and positive results.  Therefore, ginkgo biloba will continue to be in existence for a long time.