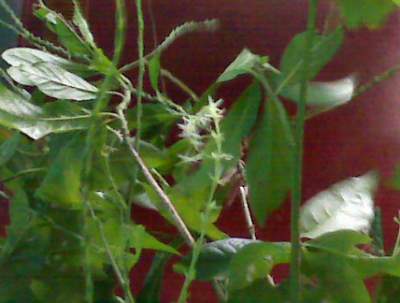 Guinea hen weed (Petiveria alliacea) medicinal herb is a plant from the Phytolaccaceae family.  It is native to Africa, the Caribbean and also South and Central America. The common names are Anamu and Gully root.

According to the Jamaica Observer issued June 11, 2006, under the topic "Local scientist on brink of cancer cure breakthrough" by Petre Williams, an Observer staff reporter, reported that, a local scientist Dr. Lawrence Williams, intent on finding a cure for cancer, believes that he is on the brink of a breakthrough.

Lawrence and his counterparts in Germany have been able to produce the anti-cancer compound, dibenzyl trisulphide (DTS), from the guinea hen weed (petiveria alliacea) which grows wild across Jamaica.

Due to this discovery, this medicinal herb is now widely used in Jamaica for every ailment you can think of, including prostate problems, as well as fibroid problems. Therefore, it is a good prostate remedy as well as a good fibroid remedy.

According to the report there are people who have heard of the healing properties of the guinea hen weed and who have indicated an interest in participating in any clinical trial that may be set up.

At least five of them have been taking the DTS compound, which Williams said was also synthetically produced by the German firm Aldrich Chemical. The reports filtering in from those people, he added, have been positive.

The Observer continued by saying that the DTS compound, produced through three years of work at the University of Hohenheim in Germany, has, when applied to cancer cells in vitro (outside a living organism), been found effective in the cure of various types of cancer.

"Despite the fact that people are using it (guinea hen weed), we still need to do the toxicological work on the pure compound to validate safety," said Dr Williams. "Also, in terms of patenting the data, we would need to have that data too.

Dr. Williams's counterparts in Germany are professors Harold Rosner and Wolfgang Kraus. They intend, Williams said, to create DTS tablets for the human testing phase of the research.

"It is a promising project," said Williams. "I am very positive about the work and I think also that one day it will come off as a curative agent for cancer. It may be that we should look at the effects of DTS in combination with radiation therapy and see if they can enhance each other."

Williams's positive outlook is based in large part, he said, on the fact that the compound was drawn from a plant and that there was need for a cancer drug with limited side effects, if any.

"Cancer is one of the most challenging diseases to mankind, and anything that can work against cancer with minimum side effects is worth the while developing," he said.

"Most of the drugs they use to treat cancer now have too many side effects. We are hoping that because the compound is natural, it will have less side effects. That is one of the beliefs."

Cancer is among the leading causes of death in Jamaica and the Caribbean. According to data received from the Cancer Registry at the University of the West Indies, in 1999 there were 2,697 cancer deaths in Jamaica, representing 17.7 percent of deaths in that year. Of that number, 1,466 were males and 1,231 were females.

Dr Williams told the Sunday Observer that his preliminary work has shown that the DTS compound does not affect healthy cells, which, he said, is a bonus.

You can read more at: http://www.jamaicaobserver.com/news/106636_Local-scientist-on-brink-of-cancer-cure-breakthrough#ixzz1Q29NrfTg 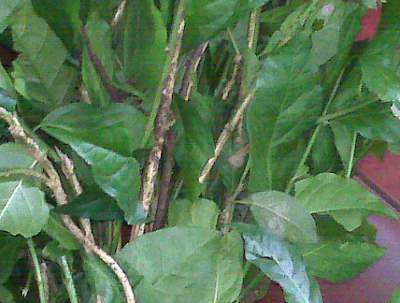 Other health benefits of the guinea hen plant

Due to religious belief, some people prefer to soak guinea hen plant in rubbing alcohol, instead of the white rum, which is preferred by others.

Anyway, whichever is preferred guinea hen weed is placed in either rubbing alcohol or white rum and used for headaches and migraine headaches.

For headaches the liquid may be sprinkled on a handkerchief and tied around the forehead until the headache is alleviated.

It is also used to treat menstrual conditions, especially menstrual cramps as well as fibroid.

Some individuals even testified of improved eye ailments after having tied the wet handkerchief around the forehead.  Also, some local folks combine it with shama macka to treat colds and flu.  These are some benefits of the guinea hen medicinal herb.

Guinea Hen Weed Tea Bags In Jamaica Not rated yet
I went to a supermarket recently and as usual, I had to visit the shelf that contains herbal teas. To my pleasant surprise I saw packs of guinea hen weed …