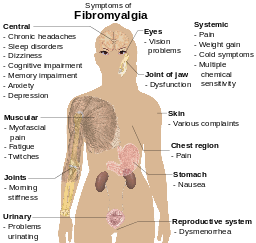 Fibromyalgia is pain in the fibrous muscle tissue and it is also referred to as muscle pain.  This condition has been defined in two different ways.

There are professionals who believe that fibromyalgia is caused from over using the muscles of the body.  This can result in in the muscles being stressed, injured and damaged.

Then there are those who believe that fibromyalgia can be caused by under use of the muscles.  However, the fact still remains that the symptoms are the same and the injury and damages are the same as well.

So the important thing is treatment  and prevention of fibromyalgia so as to combat its progression and natural treatment is an option.  Other common names that fibromyalgia is referred to are fibrositis as well as fibromyositis.

Symptoms of fibromyalgia are pain, soreness and tender to touch if pressure is applied to parts of the body such as the neck, chest, shoulders, hips, buttocks and also the thighs.

If there is also constant pain in most of the muscles of the body for over three months, then fibromyalgia should be considered.

This condition cause the muscles to be very painful which can prevent a good night's sleep, start a fever, brings on anxiety, fatigue, chronic headaches, cognitive impairment, chest pain, depression as well as halt physical movement.

There are various treatment for fibromyalgia inclusive of herbal treatment because there are some medicinal herbs that are effectively used to treat this condition.

Medicinal herbs such as basil, St. John's wort, cayenne pepper, ginger, rosemary as well as lavender can treat fibromyalgia and its symptoms.

Aromatherapy and Ayurveda is also very effective as they will treat depression by calming and soothing the mind.

These are good in the sense that inflammation is associated with fibromyalgia and they are good to fight off virus, bacteria and infection.

My friend who suffered from fibromyalgia

A friend of mine once suffered fibromyalgia.  It was so bad that he was admitted in hospital under careful watch because it affected his reasoning to think properly.

He was so depressed and nervous that it really affected his mind.  Now my friend was a workaholic and he would lift heavy packages every day because that was his job.  So right there and then a person could detect an overuse of muscles.

I know many persons might be suffering the same fate and are unaware of what is happening.  Make sure to check with your doctor if you are experience any of the above symptoms.

Thank God, my friend is back to normal and he is now monitoring his physical activities.  He is also using some of the herbs for fibromyalgia to prevent another attack.

Return from herbs for fibromyalgia to medicinal herb remedies

Return to from herbs for fibromyalgia to home page