Japanese burdock medicinal herb is used as vegetable in Japan 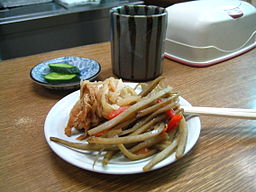 Japanese burdock (Arctium lappa) medicinal herb is from the family Compositae. It is a herbaceous plant and the common names are Lappa, burdock, Gōbo, Burrseed, Cocklebur, Sticktight, Edible burdock, Greater burdock and Love leaves.  The root and leaves are used for both medicinal and culinary purposes.

It is native to Europe and also Asia and it is one of the largest staple cultivation in Japan. The medicinal properties are diuretic, antibiotic, diaphoretic, as well as anti-inflammatory.

To others, it is simple, Greater burdock.  This medicinal herb contains vitamins, minerals as well as fiber.  The root also contains fiber, amino acid, potassium and polyphenols.

It is excellent for most digestive conditions. It is a detoxifying herb which helps to cleanse the blood of all impurities. As a matter of fact it has been traditionally used in folk medicine as a cleansing blood purifier.

The nineteenth century Anecdotal reports proposed that it was utilized by the Ojibwa tribe.  Currently, it is an ingredient in the famous Essaic tea which is a treatment for cancer.  Its uses are also found in hair care products, shampoos and some cosmetics.

The seeds of Greater burdock medicinal herb are used traditionally in Chinese medicine.  It is used to treat flu, colds and skin ailments.  However, in regards to cold and flu it can be found in a formula which is called niubangzi.

Japanese people love to eat the leaves in springs because at that time the plant itself is very soft. Therefore among the burdock food recipes are two burdock dishes that stand out in my mind.

It is used by them to make a dish which is referred to as kinpira gobo, also called braised burdock root. This is a traditional dish cooked in many homes in Japan.

The other dish is called burdock makizushi and this is a sushi that is packed with pickled burdock root, which is usually dyed in orange colour giving it a look like carrot.

The tea, benefits and dosage

The burdock tea is an effective herbal remedy for acne and other skin ailments such as eczema as well as psoriasis. It is also good to treat cancer.

Put to boil two teaspoonful of the dried burdock root to make a cup of tea. After awhile, reduce the heat and allow to simmer for about thirty minutes. Then strain and sweeten Japanese burdock tea if sweetening is desired.

You may also want to read: