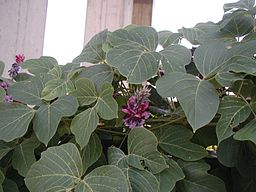 Kudzu (Pueraria lobata) medicinal herb is a climbing vine that is green and grows profusely in length, even up to a person's height.   This plant is noted as a traditional Chinese Medicine and it is native to Japan, Asia and China.  Some of these herbs have some weird names, but why worry about names when the benefits are rewarding.

For hundreds of years, it has been traditionally used as tinctures and herbal teas in East Asia.  An herbal tea which is referred to as kuzuyu is made from the powder by Japanese.

It is a perennial plant from the Fabaceae family and it is now grown in the United States of America and Canada.  A poem was dedicated to this culinary plant by James Dickey which you will find at the end of this article.  A very nice move I must say.  I wonder if I should also write some poems in regards to my favourite medicinal herbs?  I might very well do so in the near future.

The primary part used as herbal medicine is the root.  However, the leaf and flower may also be used as medicine.  The common names are Pueraria lobata, Gange, Japanese arrowroot, Kudsu, Mealy kudzu, Mile-a-minute vine, Vine that ate the South, Foot-a-night vine as well as kudzu vine.  Some of the common names are related to its ability to overgrow in length.

It was an exhibition at the Centennial Exposition in Philadelphia, Pennsylvania in 1876 in celebration of one hundred years.   It was brought there by the Japanese, one of the many countries who were invited.  It was the center of attraction, boasting some very big leaves with blooms that were sweet smelling.  It was so eye catching that the Americans could not resist the urge to make it into an ornamental plant.

The Chinese referred to it as GE-gen and it has been utilized as a traditional Chinese medicine for years.  It was first mentioned in an age-old herbal text circa A.D. 100 which was known as Shen Nong.  In China, the herbalists utilized the root as a treatment for Wei syndrome which is a disease that evidently appeared under the surface.

It is also good to treat high blood pressure (hypertension), headaches and to quench thirst.  Although it was mainly used to alleviate alcoholism as well as drunkenness, it was also used to treat migraines, diarrhea and allergies.  This was done by beating the root and using it to make a tonic.  It may even be used to treat Alzheimer's disease.

It is used as animal feed in southern United States to feed goats.  It can be however used as feed to various grazing animals.  Other resources of feed should be sort after because kudzu is only good on a temporary basis.  The reason for this is that four years of continuous grazing can destroy stands.

It is such a versatile herb because it is also used in southern United States to manufacture lotions, compost and soaps.  The fiber that can be retained from it is referred to as ko-hemp and is used to make paper and clothing.  The stems are also used to make baskets.  I would refer to it as an overall plant with overall benefits. 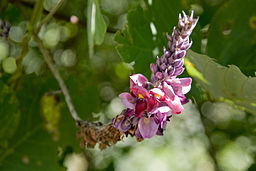 Japan invades. Far Eastern vines
Run from the clay banks they are

Supposed to keep from eroding.
Up telephone poles,
Which rear, half out of leafage
As though they would shriek,
Like things smothered by their own
Green, mindless, unkillable ghosts.
In Georgia, the legend says
That you must close your windows

At night to keep it out of the house.
The glass is tinged with green, even so,

As the tendrils crawl over the fields.
The night the kudzu has
Your pasture, you sleep like the dead.
Silence has grown Oriental
And you cannot step upon ground:
Your leg plunges somewhere
It should not, it never should be,
Disappears, and waits to be struck

Anywhere between sole and kneecap:
For when the kudzu comes,

The snakes do, and weave themselves
Among its lengthening vines,
Their spade heads resting on leaves,
Growing also, in earthly power
And the huge circumstance of concealment.
One by one the cows stumble in,
Drooling a hot green froth,
And die, seeing the wood of their stalls

Strain to break into leaf.
In your closed house, with the vine

Tapping your window like lightning,
You remember what tactics to use.
In the wrong yellow fog-light of dawn
You herd them in, the hogs,
Head down in their hairy fat,
The meaty troops, to the pasture.
The leaves of the kudzu quake
With the serpents' fear, inside

The meadow ringed with men
Holding sticks, on the country roads.

The hogs disappear in the leaves.
The sound is intense, subhuman,
Nearly human with purposive rage.
There is no terror
Sound from the snakes.
No one can see the desperate, futile
Striking under the leaf heads.
Now and then, the flash of a long

Under the tussling surface.
You have won, and wait for frost,
When, at the merest touch
Of cold, the kudzu turns
Black, withers inward and dies,
Leaving a mass of brown strings
Like the wires of a gigantic switchboard.
You open your windows,

You alive inside your frail house,
And you think, in the opened cold,
Of the surface of things and its terrors,
And of the mistaken, mortal
Arrogance of the snakes
As the vines, growing insanely, sent
Great powers into their bodies
And the freedom to strike without warning:

From them, though they killed
Your cattle, such energy also flowed

To you from the knee-high meadow
(It was as though you had
A green sword twined among
The veins of your growing right arm
Such strength as you would not believe
If you stood alone in a proper
Shaved field among your safe cows--):
Came in through your closed

Leafy windows and almighty sleep
And prospered, till rooted out.

Kudzu is a medicinal herb that should be considered as herbal medicine.