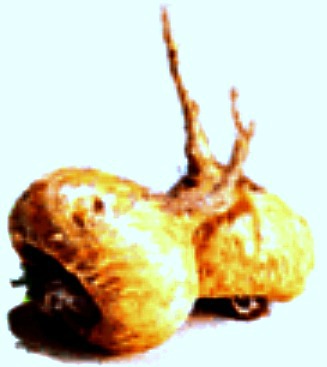 Maca (Lepidium peruvianum) medicinal herb is indigenous to the high mountains of the Andes in Bolivia and Peru and it is of the Brassicaceae family.  It is seen as the highest altitude plant in the whole wide world.

The native people utilized it as part of their food, so it was historically grown and harvested as a food product.  I have been hearing about this plant for years now and I have just come to realize that it is really an excellent natural healing plant.

The main part used as herbal medicine however, is the root which is packed with medicinal benefits. The root can be very thick boasting a diameter of up to eight centimeter.

The root contains carbohydrates, fiber, sterols, lots of amino acids, vitamins B1, B2, B12, C and E, minerals such as calcium, iron, magnesium, phosphorous and also glycosides.

The common names of this plant are Pepperweed, Ayuk willku, Peruvian ginseng, Maca-maca, Mace, Maino, Lepidium peruvianum, Lepidium meyenii as well as Ayak Chichira. It is a perennial herb and it blooms some small off-white flowers.  The medicinal properties are nutritive, tonic, adaptogenic, immunity booster and oestrogenic.

This medicinal herb which is a part of the mustard family, was not only used as a food but it was also used as an herbal medicine by these native people. They believed that it was an excellent remedy for sexual dysfunction as well as for infertility and they also used it to treat these conditions.

It is able to distribute similar effect as Sildenafil citrate, which is sold on the market as Viagra. This truth was determined by researchers on behalf of many drug companies of the USA due to the fact that they needed a substitute to Viagra which carries some side effects. To the researchers, it was a worthwhile discovery.

It can withstand an extreme icy cold weather, so it is understandable when it thrived at an altitude of up to 14,500 feet above the ground. It can be overlooked by cultivators because the leaves which are ruffled have an habit to stretch out very close to the ground.

The medicinal benefits are primarily found in the powdered or pounded roots. A tonic to boost and maintain energy may be made from the root and it may also used as an aphrodisiac which was practiced by the ancient people as well.

Various athletes also consume it as an energy tonic and this habit was initially adopted because fighters, at the time of the Incas, traditionally devoured the root, which carried a strong odor, in readiness for war. They believed that doing so it could energize and strengthen them for the task ahead.  Athletes believe that it can enhance their performance.

Although it is primarily deemed as an energizer, just like its closely related Siberian ginseng, herbalists utilized it as a soothing lubricator oil for arthritic joints and it was also used to treat respiratory conditions.  It is also used to improve libido, treat sterility and infertility for both men and women.

Some people combine it with bee pollen to make an ideal concoction to enhance sexual performance.  It will help to promote endurance and stamina and this concoction can also treat depression, trauma and different kinds of addictions.

It possesses sterols which are responsible for regularizing steroid hormones, such as progesterone, estrogen as well as testosterone.

It is currently sold in stores mainly as an herbal tonic which can combat fatigue and it can also improve memory and other related conditions associated with stress.

Now there is gelatinized powder.  This is a process referred to as food extrusion in which starch is removed from the root making the starch more potent and easy to digest.  Mix gelatinized maca with beverages and food for better absorption.