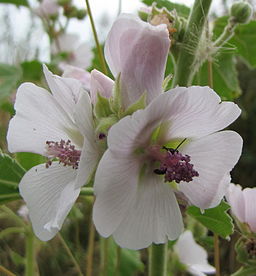 Marshmallow (Althaea officinalis) medicinal herb, also called Marsh mallow had been utilized by early nineteenth century by students who extracted the juice from the root and then used it as herbal remedy for sore throats.  In days of yore, not to be left out by any means, this plant actually created a reputation for itself in traditional medicine. Due to this reputation, it was acknowledged by Dioscorides as well as Historian Pliny.  It was embraced by the Chinese, Romans, Greeks as well as the Assyrians.

It is indigenous to Europe and Africa but was taken to America as a medicinal herb.  It received this name due to the fact that it loves to thrive in swampy and moist areas which are referred to as marshes. It belongs to the Hibiscus family, which is classified in the group of ornamental plants commonly found in Florida.

The sweet confection marshmallows that are used in hot cocoa as well as at campfires,  really got its name from this plant. Yes, it is hard to believe, but there really is a plant by this name and the parts used as herbal medicine are the leaves, root as well as the flowers.

There are those in Europe who utilized it as food as well as herbal medicine. The practice of using it as herbal medicine belongs to an earlier time in history, as far back to the Ancient Greeks and also the Romans. The current traditional herbalists continues to regard this herb as a herbal remedy which possesses anti-inflammatory properties.

Traditionally,  marsh mallow was utilized as herbal remedy for gastrointestinal tract disorders, respiratory tract conditions, as well as skin ailments. Candies were made from this medicinal herb by extracting the juice from the roots and then combining it with egg white and also sugar, the result being similar to meringue. After which, it was hardened like candy then the doctors gave it to the children to treat sore throats.

A very respected German physician by the name of Rudolf Weiss, suggested that this plant should be able to reverse and fight against soreness in the mouth as well as the throat. It was also utilized to remedy dry, irritating coughs. Weiss also believed that topical application of the herb on the skin can aid in curing mild cases of eczema.

In herbal medicine, It is regarded by many as a salve because this plant acts as a soothing agent that can reverse the effects of irritation as well as reduce inflammations. It projected itself as such an excellent calming remedy for respiratory conditions that the German Commission E permitted the utilization of the leaves as well as the flowers as a remedy for sore throats and dry coughs.

In addition, extract taken from the leaves and flowers of this medicinal herb may be used to gargle the sore throats which will bring about the same relief.

To treat a dry coughs, boil 4 teaspoonfuls of the dried leaves or flowers in 2/3 cup of boiling water for 10 to 15 minutes then consume one cup of marshmallow tea three times per day.