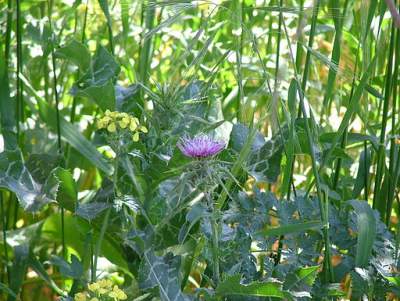 Milk thistle (Silybum marianum) medicinal herb is an annual as well as biennial plant.  It is from the Asteraceae family and it is native to the Mediterranean region and has been adopted in Central Europe, North and South America, Germany and Southern Australia.   The main parts used as herbal medicine are the seeds, referred to as silymarin.

It is a traditional medicinal herb going as far back as the 4th Century B.C. where it was utilized for various ailments, especially for the liver, kidneys and gallbladder.

Standing at 2 to 6 feet tall, and hard to miss white patches against a dark green background of the leaf,  this medicinal plant is seen as toxic to animals.  This is due to the high levels of concentration of nitrate.  So avoid giving it to your animals.

Many individuals might be wondering what affiliation it has with the name Mary.  It is believed that the early Christians dedicated this medicinal herb to Mary by referring to it as Marian thistle.  This name was subsequently approved, accepted and used by Science, hence the name, Silybum marianun.

This medicinal plant has been utilized for hundred of years in Europe primarily for cleansing, repairing and supporting the liver.   It can protect the liver from toxins that usually enter the liver and cause various damages. It is seen as the herbal detox for healthy liver.

During the nineteenth century extracts from milk thistle was seen as a treatment for various conditions.  It is remedy for varicose veins, cancer, impure blood, menstrual difficulty, biliousness, jaundice, hepatitis A, B, and C, clogging of the liver, kidneys, bladders, removal of gallstones and spleen.  It was also used to promote the production of breast milk as well as aid in the secretion of bile.

It is the ripe, rich silymarin seeds that are really responsible to rid the liver and body from dangerous microorganisms and toxins. 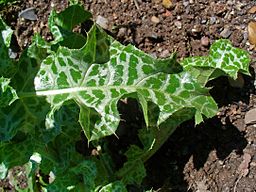 Herbalists once believed that since this medicinal herb is associated with bile secretion then it could be utilized as a remedy for depression (a condition once linked to "black bile.")  However, currently Silybum marianum is no longer regarded as treatment for depression due to the fact that melancholy and moods are no longer associated with the bile.

It is recognized as a natural live cleanser because it aids in controlling the precise amount of glutathione in the liver.  What is glutathione? It is similar to amino acid which performs a very important role in the neutralization of toxins.  This was sanctioned by Scientific researches which constantly demonstrated that milk thistle can aid in blocking the decrease of glutathione levels and may also increase levels by approximately 35%.

It is also used to treat prostate cancer, diabetes, menstrual ailments, loss of appetite, jaundice as well as allergy.

It is advisable not to purchase the tea as it is deemed not very effective and will not be able to treat any medicinal ailment.  It has been discovered that small quantity of silymarin is found in milk thistle teas.