Periwinkle medicinal herb is planted in the front of my yard. I do not only plant it for medicinal purposes but it beautifies the yard with its constant white, pink or purple flowers. In addition, my goats completely ignore it.

This could be attributed to the fact that it may be toxic to some animals, including goats, so it is able to strive to its full potential, and especially under any weather.

The following is an extracted article from the Jamaica Observer concerning this powerful herb:

Due to popular demand we are reaching into our archives! Today we publish Buckston Harrison's contribution to the March 1, 2007 edition of Buckston and Huber's Alternative. Huber's contribution is current.

THE white periwinkle (Vinca minor) commonly used in Jamaica as a hedging and a garden rose, is also a powerful medicinal plant.

Other species of this flower include the Vinca Major and the Vinca Rosea which have been used in treatments for cancer and diabetes by scientists in England and Canada.

As a child I fell in love with the periwinkle. I considered it a beautiful and intriguing wild flower, which is said to be indigenous to the island of Madagascar where it is known as Vinca Rosea.

The name comes from the Russian "pervinka" which in turn derives from the word "pervi" meaning first. It is one of the first flowers of spring.

This is the pink variety is said to be of European origin. It is used as an astringent for the skin and in the preparation of a herbal tonic for hemorrhages and menorrhagia (heavy menstrual bleeding).

It is also used as a laxative and gargle. When made into an ointment, it is good for piles and inflammatory conditions of the skin.

This is any member of the white variety. Some are pinkish white with stripes. These are good for treating nosebleeds, eczema, toothache and bleeding gums. In South Africa the natives use it for diabetes.

This is the Madagascar variety and is quite distinct. It has a pronounced lavender blue colour. It is said to represent sincere friendship and love. In some countries it is sent between friends and lovers as a symbol of lasting love. 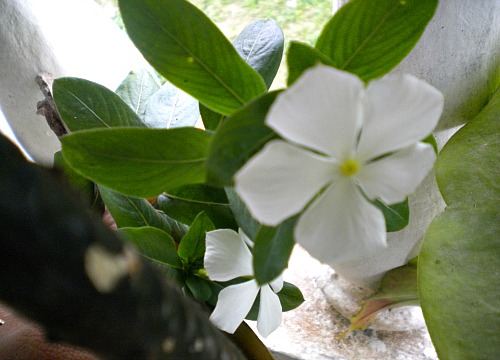 All varieties of this plant are considered potent. They are good for memory, nervousness, bleeding piles, diabetes and ulcers.

I treated myself with it after I found out that there was a cyst in my left lung, attached to my rib cage. Doctors said it was a serious condition and advised me to quit smoking. They also told me that I had to undergo an operation.

On the afternoon of the day they gave me this information, I went home and prepared a concoction of periwinkle, Irish Moss, parsley, comfrey and other herbs.

That night I felt the cyst leave my lung. It went into my stomach and I passed it out the following morning. I eventually went to Kingston and was examined by the doctors who told me that the cyst was gone and asked me what had happened.

I smiled and told them that I had used some herbs and spices before coming in.

They told me that all I had was a little blood that had to be removed by an operation. The operation was successful and I spent four weeks at the institution, thanks in large part to the power of this plant. —

Buckston Harrison was well known for his work as a herbalist, especially in western Jamaica. He resided in Sheffield, Westmoreland until his untimely passing on Monday, March 22, 2010.

Return from periwinkle to diabetes herbs