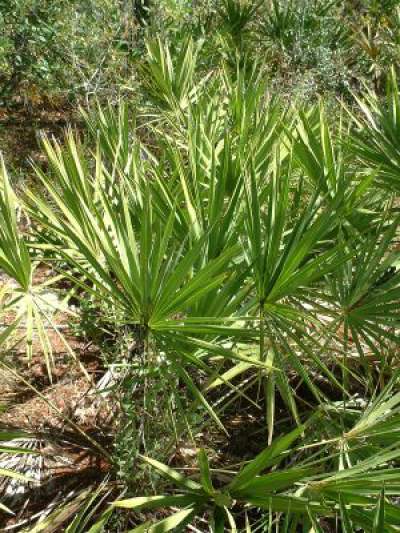 Saw palmetto (Serenoa serrulata) is an effective medicinal herb that is well known to numerous amount of men globally and it is taken from the palmetto fan palm tree.

It is very popular and you can probably say that it is a man's herb because it is specifically seen as the treatment for men who are suffering from certain ailing conditions.

It is also a very beneficial herbal remedy for women as well, exclusive of pregnant and nursing women, who should avoid using it, during these times.

It is a member of the family, Arecaceae and it is native to the Southeastern parts of the United States.

It enjoys growing in the warmer climates around the globe. The ripe fruit is used as medicine.

Constituents of the berries are lipids, flavonoids, beta-sitosterol, and lipase, which is an enzyme.

The medicinal properties are diuretic, sedative as well as tonic. It can be found as herbal supplement in many stores worldwide.

The main parts used as herbal medicine are the partially dried ripe red fruits or berries from which an extract is derived. It is known to be effective anti-androgen herb.

Although initial studies were done in regards to the treatment of prostate conditions, it is also found in many hair loss solutions because it is a natural hair loss remedy, especially for men who suffer baldness.

It can provide the needed enzymes and hormones to really fight against the loss of hair.

This prostate herb has been used for many years now as prevention and treatment for benign prostatic hyperplasia (bph) or prostate enlargement and also prostatitis, especially for men over the age of fifty years old.

One thing is for sure is that most men love this herb because they believe in its health benefits.

Also, it was discovered that it is an effective DHT blocker.  It can bar the formulation of DHT (dihydro-testosterone) in males who are ailing from enlargement of the prostate.

DHT is also that hormone which caused male pattern baldness in men.  This is the reason that palmetto is good to treat the loss of hair.

Saw palmetto hair oil can now be purchased and it can also be used by women.

Saw palmetto is also an effective herbal remedy for urine problems that have developed due to the enlargement of the prostate. One of the symptoms is frequent urination.

It would seem that older men are using it more than younger men, but I think it would be beneficial for the young as well to help prevent these ailments and other afflictions that are attributed to both young and old.

Overall, it can improve the health, lifestyle, diet as well as nutrition for the whole body. It is really used as a dietary supplement.

A friend of mine suffered for years with prostate problems and had difficulty in urinating. He spent a lot of money trying to treat this condition and was introduced to this medicinal plant to use as an alternative remedy.

Today, he is doing much better in addition to eating a healthy diet and has escaped prostate cancer.

Two of the extracted soft gels per day will help to maintain proper urinary function in men by supporting prostate health.

Saw palmetto is even known to enlarge breast size in women as well as treating pelvic pains and other forms of cancer.

The dark berries of palmetto

The dark berries were traditionally harvested, dried and ground to be made into a tea to treat urine problems and alleviate conditions related to digestion.

It boosts the immune system and fights against both male and female infertility as well as it is an effective remedy for sexual dysfunction in men. It also balances metabolism and stimulate the appetite.

It is advisable that upon purchasing these supplements, look for the high quality supplements that were tested in clinical studies.

Also, ensure that these supplements have eighty-five percent of fatty acids as well as 0.2 percent of sterols.

If capsules are preferred, then160mg capsule should possess 136mg of fatty acids as well as 0.32mg of sterols. Saw palmetto is sold in stores worldwide.