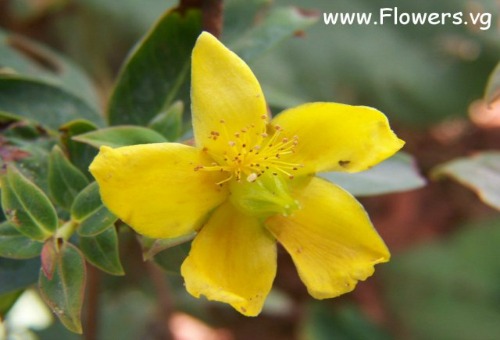 St Johns wort (Hypericum perforatum) medicinal herb is native to Europe and Asia. This is a plant that is now popular in many countries, especially in the temperate areas and it is also found all over the U.S.A.  The natural extracts from it has been proven to be a relaxing and soothing agent and so it can be described as a natural antidepressant.

It is an herbaceous and perennial plant from the Hypericaceae family and the primary parts used for medicine are the flowers and herb tops.

There are over 370 species of the genus Hypericum all over this universe.  The medicinal properties are aromatic, antibiotic, astringent, resolvent, expectorant, anodyne, cholagogue, vulnerary as well as nervine.

It is widely used in the Caribbean and extracts can be gotten in tablet or capsule form, as well as in tea bags and tinctures.

Some of its constituents are flavonoids, glycosides, tannins, essential oil, resin, rutin and phenolic acid.

St Johns wort is believed to be named after the Bible character, John the Baptist

It is believed to have named after Saint John, the Baptist and it is also believed that the name derives from its traditional flowering and harvesting on St. John's day, which is on the 24th of June.

According to Wikipedia, the free encyclopedia, the genus name Hypericum is derived from the Greek words hyper (above) and eikon (picture), in reference to the traditional use of the plant to ward off evil, by hanging plants over a religious icon in the house during St. John's day.

St. John's wort is a well known plant to treat depression.  European Researchers have discovered an element in it by the name of hypericin and when it is combined with chemicals in the brain, the result will bring calm to emotional disturbances, eradicate depression and soothe the nerves.

Some describe it as imipramine and maprotiline which are synthetic medicated antidepressants.

This medicinal herb is being used by thousands of people as a treatment for depression and anxiety.

In Germany and it is commonly prescribed for mild depression, especially in children and adolescents.  It may also be used to stop bed wetting.

This medicinal herb was also used by Native American as an anti-inflammatory, antiseptic and astringent.

Its health benefits also include treating wounds and ulcers that are difficult to heal.  It will cleanse the wound and enhance healthy cells and tissues.

It is an anti-inflammatory herb in regards to toxic and deadly sores, cellulite, lymphangitis and boils by decreasing inflammation.

St Johns wort medicinal plant helps you to lose weight maybe because drinking the tea will improve the mind by allowing you to think much better of yourself and therefore, may cause you to eat less food.

To make the oil simply infuse the flowers in olive oil and the preparation dosage should be one ounce of st johns wort to be infused in a pint of water then take one tablespoonful taken as a dose.   The oil can also be used on the skin to treat skin ailments.

It is advisable to shun bright sunlight if you use it due to a photo-sensitizing element that is built up under the skin.

This built up is produced through exposure to strong sunlight and this can cause the skin to burn.  This is just one side effect that is detected, so avoid sunlight if you are using St Johns wort.